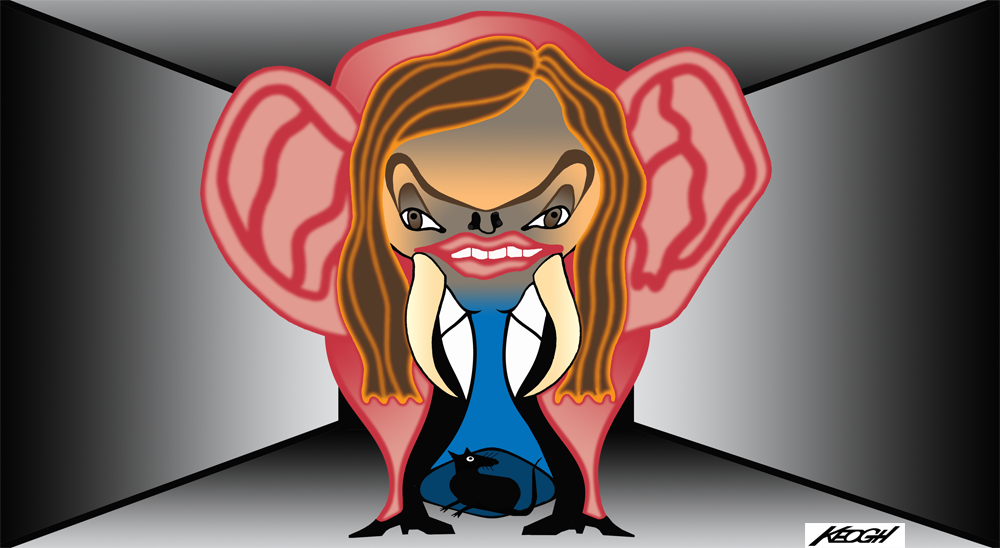 Riding his bike through the corridors of parliament house, wearing his fire brigade overalls with his red speedos on the outside, donning a hard hat and safety goggles, Tony Abbott stopped a cleaner to ask for directions, “Excuse me, I can’t remember where my office is. I’ve been so busy obeying Peta – running, cycling, life-saving, fire-fighting, kissing babies, visiting factories and gallivanting around the country – that I seem to have forgotten. She sends me here, there and everywhere to keep the media distracted from the real business of prime ministership. I happily use her fail-safe scripted verbatim rhetoric ad infinitum, ad nauseam. She’s a genius. I tried to ad lib a few times with my own ideas but those gaffes made me a laughing stock. Prince Philip was the barbecue stopper of the century. So I just do what she says and follow the script. She runs the government. I call her boss. That’s how I manage to keep my job as PM. Without her I’d be stuffed. I have the political discretion of a flying pink elephant on steroids, with a pretty face, if I might say so.

The ‘cleaner’ was an unrecognised journalist by the name of Paul Kelly, who promptly gave his name. “My word you are multi-talented – a journo, singer-songwriter and a cleaner.”

A hasty shower and a “help-me-get-dressed-and-choose-a-tie-please-boss” later, Abbott addressed the National Press Club with an unread speech prepared by hers truly.

When the people of Australia elected their prime minister they got one of the fiercest political warriors ever known in the history of federal parliament. I am in command and control of this government, and I am getting on with the job of governing our country.

There is absolutely no possibility of me losing my job, despite the wishes of the majority of cabinet and backbenchers who loathe and despise me. I cannot be sacked because I am the boss. Bosses don’t sack themselves.

So Julie, hate me as much as you like. I ain’t goin’ nowhere.

And if you or Malcolm or Scott think you can get rid of me, I’ve got so much dirt on you I could leak like a sieve all day everyday for years. I’ve had my spies planted in your offices and I know you are ratting on me. I eat rats for breakfast, so watch it!

Abbott: Whoops, I seem to have the wrong document. Are there any questions? Yes, you the cleaner I was talking to earlier.

Kelly: Mr Abbott, I put it to you that you have the right document, heinously contrived as a ploy by your chief of staff to look like a mistake but, in fact to shore up her position as pseudo prime minister. What you have just blurted out makes her untouchable. I put it to you that there is an elephant in this room and its name is Peta Credlin. It was you who was elected prime minister, not her.

Abbott: When the people of Australia elected their prime minister they got one of the fiercest political warriors ever known in the history of federal parliament. I am in command and control of this government, and I am getting on with the job of governing our country.

Kelly: Mr Abbott, those are Credlin’s words not yours.

Abbott: Whatever Peta says is true and I stand by her every word. You have my word on that. I put it to you that our discussion – when I said that she runs the government – was a figment of your imagination. I deny having the political discretion of a flying pink elephant on steroids, with a pretty face, if I might say so. With my looks and her brains we are a duumvirate with the intestinal fortitude you, as a cleaner, may never see the likes of again. Better fly now. Come on boss, let’s wing it back to our office. Thank God you know the way.