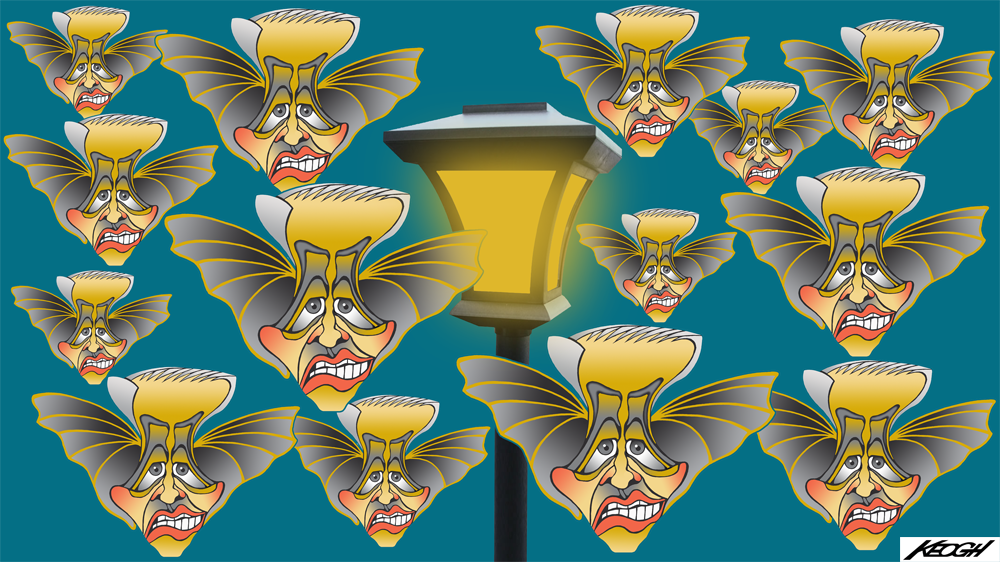 Mothologists are aflutter with the discovery of a new phenomenon unheard of in the annals of mothology. After dusk every evening, humanoids from Sydney’s trendy inner suburbs metamorphose into moths and are drawn to the garden lamp of Malcolm Turnbull in the posh harbour-side locale of Point Piper, only to return before dawn to continue their existences as leftie hipsters.

“Malcolm is their Messiah, his lamp is their Mecca and every night they make their pilgrimage.” said a leading mothologost. “Moths being drawn to light sources is nothing new, but being drawn to an idolatory source of enlightenment is an exciting development in the evolutionary realms of mothdom.” he said. “But we are baffled. These are left-wing socialists who would normally spurn any association with Point Piper. We cannot understand how lefties are so besotted with this Liberal that they even take on a resemblance to him.”

A team of clinical socio-political entomological psychologists has made daily visits to trendy hipster cafes in search of clues. It found patrons in states of trauma, privately weeping into their skinny lattes, muttering near indecipherable whisperings, which all clinicians agree can be paraphrased as, “I love Malcolm, but don’t tell anyone.”

The team’s observation:
Identity crises, self-loathing and paranoia on a mass scale.

The team’s diagnosis:
It is all to do with left and right hipsterical hemispherical brain functions. The magnetic mystique of Turnbull, known to be pro-republic, pro-same sex-marriage, pro-ETS, pro-sexual-equality and pro-ABC, is so appealing, in the absence of any left-wing inspiration, that the right hemisphere launches into euphoric fantasies of a charismatic prime minister who will lead Australia into enlightenment.

When the left hemisphere gets wind of this, it screams at the right, “What are you doing you idiot. You are a leftie hipster and you should be ashamed of yourself. You traitor. You defector to the Liberal side. What would your peers say?”

Inner conflict becomes unbearable until the right hemisphere prevails bringing a profound sense of universal connectedness with like-minded souls who, as it turns out include the hitherto feared peers. Blissful transcendence into messianic Malcolm exaltation overrides all left brain constraints, and en masse they metamorphose and take flight.

The team’s prognosis:
Left brain hemispheres will become servile to the right, and euphoria will prevail on a 24 hour cycle. Humanoid-mothoid symbiosis will be complete. Man-moth Malcolm mania will reach mammoth proportions.